Getting to Know the Players-Take Seven 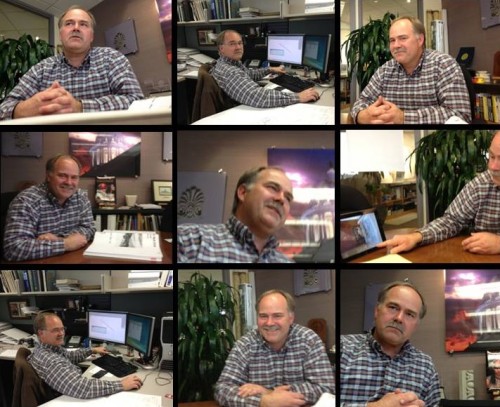 Getting to Know the Players-Take Seven

Chris, recap for the followers what your role is on this project.

Chris: My role is to take care of the superstructure, complete the plan sheets and work out the most important details for the purpose of detailing the structure.

Now that you have been working on the project and it’s under construction, what do you think about the project in general?

Chris: It’s a very unique structure. It’s not very often that the structure is left exposed. It’s just the whole framing concept, the overall look, it’s going to be a nice looking building in this location.

I agree. In fact I’m hoping that we are going to be able to submit this for some design awards.

Chris: I hope so. It would be very deserving of it. We should try.

So we’re going for LEED certification on this thing.

Chris: (Chris was chuckling) Yes, I found out in a rude way.

Chris: We had an issue with the concrete floor and a walk off mat, and I found out that the walk off mats had to be a certain length. We were going to shorten it in the field to simplify some things, but to get the LEED certification, it had to be that length. So I learned something through that process.

LEED doesn’t impact the structural discipline as much as other disciplines like mechanical. So is that pretty much how it touched you, the floor mat?

Chris: Yes (with a slight laugh). You’re right. We don’t take advantage of the concrete LEED points. It’s pretty hard to get those any more.

Is that the fly ash?

Chris: Yea, the fly ash. You have to have a fair amount of fly ash in the concrete mix and we typically don’t allow that high of a limit.

I suppose we could get into some recycled material for the aggregate. Like if they pound down some old highway into nuggets that we could use.

Chris: Ah, you could.

Well there’s one detail… Of course energy efficiency is at the top of the heap in terms of getting LEED points it seems like. And so we we’re all worried about thermal transfer of outside to inside or loss from inside to outside. And we did have a particular structural detail that had to address that thermal transfer issue.

Chris: Yes we did. And I think we got there. The outriggers outside the building being tied to the structural beam, the size and magnitude of the beams and the direct exposure to the conditioned air. We ended up having to provide moment connections with fiberglass plates between them and special nylon washers to separate the bolts from the connection plates. And then architecturally they provided a layer of foam insulation jacketing all of that which helped to keep the thermal transfer from happening.

Well it became pretty elaborate. It wouldn’t have been as big an issue with a wood laminate structure, but the client had concerns over maintenance and weathering.

Well, going back even further, how did you take this career path to become a structural engineer? How far back does that go?

Chris: My career path started in high school. We had to write a report on a career. We had these booklets and one of them was civil engineering and I liked building things in my high school classes. So I wrote my report on that. And it just happens that my dad was a surveyor within the state of Oklahoma. He didn’t get his civil engineering degree although he worked at it. So, I went ahead and took the next step to complete civil engineering and I got the opportunity to continue my studies and get my masters and so I went into the structural route.

Chris: The University of Oklahoma had a real good engineering laboratory. I got to see things like the behavior of the different members and that was just real exciting to me. And so that’s how I made it into structural

Well my brother is a registered land surveyor in California. He started in environmental studies, but out of college he worked for a survey company. Then he got his surveyors license and now he’s got his own company.

Chris: My dad surveyed for Noble Oil Corporation surveying leases and the roadways into leases.

The oil industry had been good to lots of people.

Chris: It has. It was good to him.

So what’s been some of the greatest challenges on this project?

Chris: It was getting up to speed. It looks simple but it is complicated. And so getting up to speed on the project and then how we are going to relay the information to the detailers and to the contractor in a way that they can efficiently complete the project. That’s kind of at the beginning and then the connections between outriggers and framing inside the building. Especially at the corners of the building where we have outriggers crossing there’s a column and we are transitioning from a tube to a wide flange. It has challenging connections.

How many times have you been to the site now?

Chris: Twice now. Once with Lowe and once on my own to catch the pour of the floor slab. The first trip they didn’t have floor beams; they really hadn’t started the erection of the structural steel. I think they were a week or 2 away. But the second trip everything was looking really good. The superintendent was pretty sharp. They were discussing whether or not to shore the floor. With concerns about the large floor tiles we decided it was important to have the floor as flat as possible. So, he took it upon himself to go ahead and put some shoring under the floor deck.

So, is the elevated slab what you saw?

Man I need to get there

Chris: They had the deck down and rebar laid out on top of the deck.

Is it a composite deck?

How do they weld the studs down?

Chris: They typically use a stud gun. The stud is used as part of the arc weld in this particular case. The contractor chose to have his people use a stick welder because of the small quantity of studs. They use an arc welder and as they are welding the stud it melds the deck it becomes molten and lets the stud weld directly to the beam.

So are you familiar with the FSB Blog

You actually visit it?

Chris: Oh yeah, Once a week. I find it interesting how many people from not just in the state or the nation but around the world have picked up on it.

The WordPress stats have been pretty interesting. Last February they started the global stats. You wonder what someone from Yemen is looking at on the blog.

Chris: Well it’s hard to explain to people what we do.

16,888 views to date. You never know what they are typing in and searching.

Chris: People are always looking at what it’s like somewhere else.

Well the construction should be done this summer.

Chris: Hopefully they will pick up steam and get it closed in.

Yeah, I don’t know what the schedule is for the storefront but it seems off a little ways. I guess they are going to get the roof on before that.

Seems a little weak. They may sheer off the first real wind gust.

Chris: Uh huh. I think there’s a little issue there. But the screws also have to carry the vertical weight too.

Hey, I appreciate you doing the interview.

I’ll want to touch base with you on construction items as we move forward to get the right explanation to the readers.

Chris: You need some better pictures of the crane operating and buckets and all.

I tell those guys, get me some action shots when you’re out there, but they’re taking shots of conduits and pipes and stuff.

Chris: It’s difficult. When you walk up with the camera, the workers all scatter.

Just the normal pictures we take at the job site are not glamour shots for the blog. Although I saw a picture you took that was pretty cool. It was looking up a column, and the crane was coming over; it had some good perspective going. I thought, “man that Chris is getting creative.”

Chris: You didn’t see the bent plate in that one, did you.

Is that what you were taking a picture of? Oh gosh, I thought you were getting creative.

We both had a good laugh.