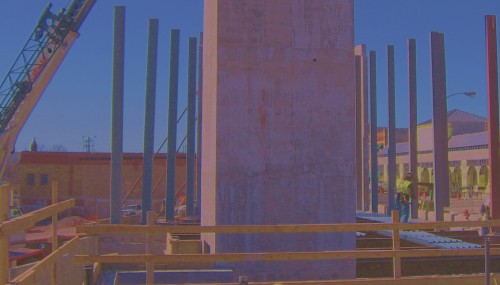 The concrete is poured over a formed steel deck which spans between the beams that are 7’-6” on center. The elevated concrete slab is reinforced with #4 rebar at 18” in center each way. To enhance the structural performance of the beams, the elevated slab is part of a composite structural design. This is a design that locks together the steel beams and the concrete slab to make them act together. The beam being connected to the slab allows the slab to act in unison with the beam effectively increasing the load that can be carried by the beam alone.

The composite concrete slab has the following specifications:

The linking of the slab to the beam is accomplished through the introduction of metal studs which are short vertical cylindrical pieces of steel with hammer heads (that’s what I call them) that are welded through the steel deck to the beams below. The studs can be welded to the deck in a couple of different ways. The first is to use a stud welder that uses the studs as a part of the arc welder. This is a specialized but expensive welder and the project does not have a lot of slab area to justify the use of this piece of equipment. The contractor has chosen to weld the studs to the deck with a more traditional arc welder. As the studs are being welded to the beams the deck essentially becomes molten in the process allowing a direct weld of the stud to the beam. It’s not a particularly good-looking weld but it gets covered up with concrete and does its structural job.

The elevated concrete slab also becomes a horizontal diaphragm providing rigidity to the overall structural frame. The same is true of the roof deck once in place and securely fastened to the roof framing system. Diaphragm action is a good thing structurally and includes the vertical diaphragms created by the sheer walls that work to resist lateral loads imposed on the building.

Above you can see the freshly poured concrete slab being troweled by concrete finishers in a combination of motorized and hand finishing. There are block outs that can be seen in the slab. It appears that along the north wall the contractor was not ready to have the floor diffusers poured as a part of the overall slab. The block out will allow the contractor to put off pouring that portion of the slab until the time that everything is in place. On the other hand, the block out in the middle of the slab is to provide an opening for ductwork that will return air from the Gallery space to the mechanical fan coil unit (FCU) located in the mechanical crawl space below the slab. That FCU is dedicated to heating and cooling the Gallery space and the supply air is delivered below the slab via ductwork connected to the floor diffusers located at the base of the perimeter glass curtain walls.

This emphasizes again how the various architectural and engineering systems are integrated together as they crisscross each other through spaces of the building. This also brings to the forefront the benefits of interdisciplinary design where all the architectural and engineering disciplines are acting in unison under one roof and as a part of one company as is the case at FSB. 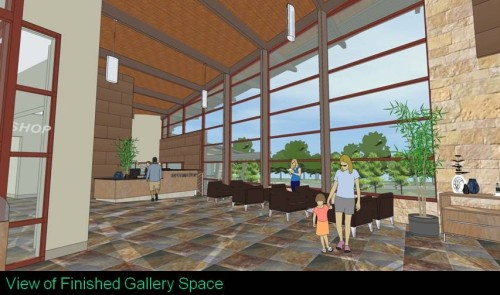 One response to “Composite Construction – materials acting in unison”