The Artesian Hotel was for many decades only a memory of a bygone era until the Chickasaw Nation decided it was time to recreate it on its original site. During its early days, the hotel was used as the Summer White House for Oklahoma’s first Governor Charles Haskell. The hotel was also a popular destination for prestigious guests that included John Wayne, Roy Rogers and Dale Evans to name a few.

The Artesian Hotel which first opened as the Winston Hotel in 1906 and was the brainchild of J.M Bayless and C.J. Webster who wanted to capitalize on the popularity of the natural springs that were a part of the new national park land that became known as Platt National Park. A significant number of interior pieces and furnishings used in the hotel came from the 1904 St. Louis World’s Fair. The Artesian was in its hay day in the 20’s and 30’s and Platt National Park was only second to Yellowstone National Park in annual attendance.

That night the Artesian was once again a place of glory and grandeur as a who’s who gathering of Chickasaw leadership, state officials, Oklahoma City officials, past mayors, bank presidents, a former OU football coach, Healthcare CEO’s, prominant businessmen, movers and shakers, and University presidents past and present were on hand to celebrate a VIP evening celebrating the return of the Artesian.

My wife and I were fortunate to be among those in attendance. Upon our check-in at 2:30 pm, we immediately took advantage of the spa offerings of the Artesian by booking a couple’s massage at the “Sole ‘reninty Spa at the Artesian.” With a complimentary glass of wine close at hand, we were massaged from head to toe and back to our heads again. Our masseuses warned us of experiencing massage drunkenness when we sat up to get off the tables that we had melted into (nothing to do with the beverages at hand). It took us 2 minutes to get that far. To top things off, I sat for a while in the men’s steam sauna by which time I was as relaxed as pasta beyond al dente. A couple spritzes of stress relieving liquid therapy under my tongue from the spa lobby put me in a place near Donovan’s rendition of Mellow Yellow. 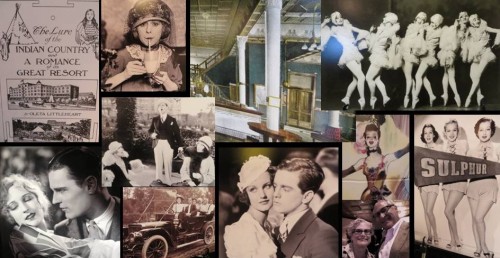 The evening began at 6 pm with refreshments and appetizers in the spacious hotel lobby. The staff was all abuzz with rumors of what was in store for the evening which included speculation of barbershop quartets, models and fireworks. The models, male and female, did show up on queue in period dress and the mingled amongst the guests. The dinner bell rang at 7pm and we all retired to the ballroom for a top notch dinner created by the Artesian chefs. Evening entertainment included the Justin Echols Quartet and the Byron Berline Band and both swept the guests off their feet. The evening concluded as we all moved to the veranda to watch fireworks.

For me this was an awesome view as the building immediately across the street to the south was the Chickasaw Visitor Center with fireworks rising from behind creating a fabulous backdrop. This design project of FSB’s would be the next ribbon cutting event and another opportunity for a stay at the Artesian. The following morning as my wife and I were making a casual greeting of the day I could hear harmonious singing and I thought “oh my gosh” it’s the barbershop quartet singing in the lobby of our floor. Turns out they were practicing in the hotel room next to ours and we enjoyed a personal serenade for the next 20 minutes before heading down to breakfast. 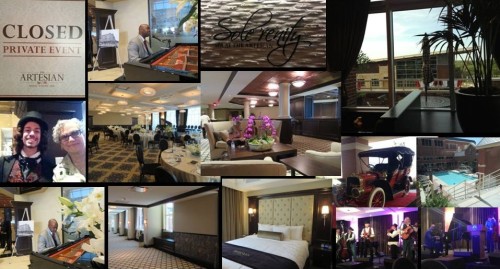 The Artesian Hotel is amazing with its elegant appointments and touches of its past style without being ostentatious. The staff was eager to assist you with whatever you desired while being ever so courteous. The rooms were spacious and comfortable. The facility has state-of-the art amenities and comforts that include the spa (both adult and children’s), indoor-outdoor pool, fitness facility, restaurant, bar, ballroom and casino. This is a must get-away experience that is only a little over an hour’s drive south of Oklahoma City.