Getting to Know the Players – Take Nine 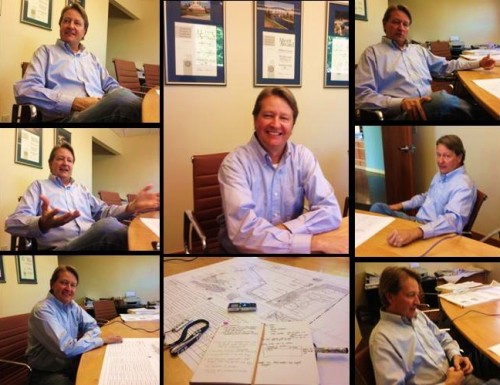 Scott Howard is a Landscape Architect and partner at Howard-Fairbairn Site Design located in Oklahoma City. FSB retained Scott to be the landscape architect for the Chickasaw Visitor Center project.

Scott, tell us about your role on the project.

Scott: Well basically we are the project landscape architects that were brought in as soon at the project became a real project. We worked with Jason Holuby and some of the other design team members and kind of got a feel for what you all were looking to accomplish from an architectural standpoint and how the building related to the site. Again working with your civil department and how they were working with grades that tended to slope across the site; quite a bit of grade change. We looked at the hardscape and how we could work our landscape to fit in with the pedestrian patterns. How to really make the site look like it’s been there a while, using low maintenance materials and conserving plant materials. It’s a LEED project so we followed the criteria to get the credit for 50% reduction in water. That’s it in a nutshell.

As you began to understand the project and what is was about, what were your general thoughts about being a part of this project?

Scott: Well, I thought it was a great opportunity. For one, the client is a very well-known client in the state of Oklahoma. Just the location of the project was a very prime spot as you enter the town of Sulphur. What we were really excited about was that the architecture. The glass and stone and other materials that were selected were real compatible with what we like to do from a landscape design approach. So with that being said, we felt very comfortable with how our landscape approach would fit it.

Tell us about some of the challenges along the way whether at the beginning or now that we are close to the end.

Scott: Probably the biggest one that I would say was an opportunity rather than a challenge was the LEED pursuit for this project. We were able to capture the rain water runoff and use that for irrigation. We have been pursuing that for a number of years and it always seems that the architectural side of the team and engineers want to nix that component of trying to capture the water. We have been working with your civil department for a number of projects and they were very receptive so that just fell into place on this project where the engineering team was very open to trying to accomplish that. And so the challenges were because we have not done a lot of that which was the capture of the water and getting it into a usable form for irrigating; pumping, vaults and all of that.

Well I’m glad that our engineers were very receptive versus others that you have worked with that were not as open.

Early on we had discussions with our entire multi-discipline team that this was going to be a LEED project and so it was going to be an important consideration and the fact was that we were taking this pretty far in terms of the number of LEED points. You know originally we were shooting for LEED platinum. We are now on target for gold. A number of points available for denser urban environments were not within our reach in the Sulphur downtown fabric.

Scott: But you have bicycle racks, a shower and so you were able to get those points.

Yes. But of course the big points come from all the engineering systems. We had photo voltaic renewable energy but when we knew we could not achieve key points for the urban environment, we relooked at the return on investment of some points and things like photovoltaic did not make the cut.

How is it that you decided one day you wanted to be a landscape architect?

Scott: It was quite by chance. I started out in college in petroleum engineering.

Really. we had a good laugh.

Scott: Yea, you know it was back in the late ‘70’s and money was flying around like crazy on Oklahoma City and that’s what everyone wanted to be but OSU weeded me out after one year of that program. I was at a party in Stillwater and there were 3 seniors living off campus in a house and their whole living room consisted of 3 full sized drafting tables. That was all the furniture there was. They had these really cool drawings and renderings on the tables. These guys were in the landscape depart and I just said “what is this? What are you guys doing?” And they said well this is our major. I said “what is it?” They said “landscape architecture.” And I thought “this is great.” I’ve always been good at art and had taken technical drafting. And I thought I can do this. I just fell into it and never looked back. My grades shot through the roof and I really liked what I was studying. Truly, I think very few people can say that they are happy and blessed to have found what they love to do. This is truly what I love to do. My wife complains that I don’t have a hobby. I don’t need a hobby.

I agree. You’ve got to enjoy going to work and you need to enjoy what you do in your profession. I hope that for everybody, but I think it’s particularly true for those of us in the design profession.

Scott: That’s true. And really being in the design field that we are in there is an opportunity to exercise a lot of skills as far as communicating with clients, presenting to groups, working with other professional design members. It’s just really a lot of fun; you’re engaged in just so many ways.

The Chickasaw Nation is no stranger to you. This in not FSB’s first time to work with them and not your first time either.

How have you seen the Chickasaw Nation as far as a client?

Scott: I think they are great from the standpoint that they are open to ideas and embrace sustainable principles. They really strive for projects that are well designed and well-constructed. I think it’s a visibility component or characteristic that they hold true through a lot of their endeavors. They really appreciate good design. So we’ve been happy to be a part of that. With every client there are projects you do and in working with them they learn about you and you learn about them. And the team gets better and better. It’s been a good experience for all the projects we have worked on.

Let’s go back to our discussion on how you chose landscape architecture as the career you would pursue. Tell me a little about the path you have gone down since college; your career, your practice.

Scott: Well, it was an interesting journey. When I did graduate from OSU, it was a sort of bust period economically in the state of Oklahoma. There weren’t any jobs in the landscape field. I sent out probably a hundred letters looking for employment not just in Oklahoma but surrounding states.  I had interviews in Colorado, Texas one in Kansas and nothing really felt right and most of them were really on the contracting side which is not what I really wanted to pursue.

Like any college kid out of school, you had to look for a job. I had relatives in Enid and my uncle was a city official in Enid and said “we need help on a survey crew, are you interested?” I said “not really, but I’ll take it.” I did that for about 3 months and I saw an ad in the paper for a nursery in Oklahoma City; that was Ferguson nursery. They hired me and I worked there for almost 5 years. I was able to become licensed during that period of time. Once I was able to do that I had kind of outgrown that job and decided to go out on my own.   we started cracking up as I began to roam around the room taking photos with my smart phone

It was in December ‘88 and at the same time I went out on my own one of my friends, well my partner Scott Fairbairn, was the head of their landscape department at Benham. And so I’m in the grocery store and he said “hey man we are really busy do you have time to help us out.” I said “sure man.” That was my second shift. I did my job during the daytime and I would go into Benham about 4 or 5 and work to about midnight. And so after about 18 months they got slow and I got busy.

So it was a great way to kind of get back on my endeavor. From there it grew slowly. I worked out of my house, and then I moved into an office Waterford where I shared a place with some friends who had started a business venture there. In ’95 I added Scott Fairbairn; he had enough of corporate life and came over. And in 2004 we decided to build our own building and have been plugging away ever since.

Well it’s a very nice building, but I didn’t see a sign with your name anywhere.

Scott: We are sensitive to marketing, billboards and everything

I did finally see it on the door when I got past all the great landscape.

One more thought; tell us about your approach to landscape design and what you wanted to create for the Chickasaw Nation on this project.

Scott: Well, I think just from a basic approach on every project, and this may sound like a cliché, but we what to accentuate the architecture. Probably 2 decades ago or more, architects were somewhat leery of hiring landscape architects because they were afraid they were going to hide their building. We’ve always taken the other approach of lets work as a team and how can we accentuate what an architect has created. And so from that standpoint we always look at building elevations and study the lay of the land; how does it slope or drain. And then we look at how we can complement that through the use of hardscape materials landscape materials, things like that. We try to keep the design somewhat simplistic as far as masses; not just plop, plop, plop; you know. It’s how can we make it to where it looks as natural as it can be for the setting that it’s in.

OK. Well that concludes our interview. Now what I really want talk about is the landscape solution that you came up with, how it came to achieve LEED and then actually some of the plant material selections that were made.