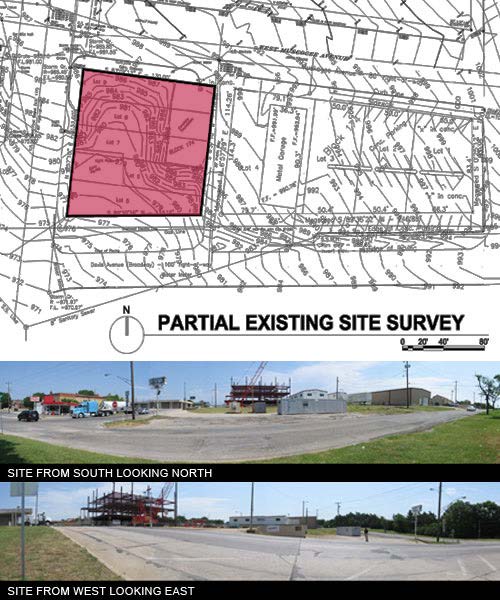 The proposed site for the Chickasaw Nation Visitor Center is located in Sulphur, Oklahoma. Sulphur is known as the City of Springs because of the local mineral waters and was initially named Sulphur Springs. Within twelve years of being formed as a township in 1892, the city has a unique history of being moved between three different sites. The population of Sulphur in 2009 was 4900. For you geomappers, the current location of Sulphur is 34˚30’33” N 96˚58’31”W on the globe.

(new post each Tuesday. Check out: The Client, The Gateway Project)

The site is an approximate 0.7 acre parcel of land situated on the northeast corner of the intersection of State Highway 7 and US Highway 177 (West First Street). For a pair of intersecting, two lane highways, this is a heavily traveled section with significant truck traffic delivering goods to the Oklahoma interior. This site lies between Davis Avenue on the south and Muskogee Avenue on the north and sits directly south of the Artesian Hotel, currently under construction. The site is bounded by the downtown area to the west and the Chickasaw National Recreation Area on the south.

The previous structure on this site was Braden Motors automotive dealership. The structure was two stories and located along the north property line with a paved area along the southern portion of the site. As of about five years ago, the only remnants are portions of the foundation and the street sign. The Google map database has not been updated recently for Sulphur and still shows the dealership at the street level views.

The existing site slopes steeply and drops ten feet from the north to the south property line over a distance of only 134 feet. The site has rock outcroppings and is in an area populated by artesian mineral springs. All utilities are within a reasonable distance of the site and can be extended to the proposed facility. The site is relatively small being 134 feet by 130 feet.

With the small size and slope of the site, fitting a building with multiple entries, parking with ingress and egress, sidewalks and green space within its boundaries will be challenging to say the least.

4 responses to “The Site”