I am making a trip to the Visitor Center to check in with the project manager for the Chickasaw Nation to see how the project close-out is coming along and to see the facility in operation first hand. While I’m there, I take the opportunity to check in with other Chickasaw projects and Chickasaw acquaintances. I call ahead to see if I can get a special tour of the ARTesian Gallery and Studios. This project was a part of a trio of projects that celebrated a joint ribbon cutting dedication which included the Chickasaw Visitor Center. Corrine Gallup/Operations Manager for the ARTesian agrees to meet me when I arrive.

We begin in the lobby and as we get started Corrine tells me a bit about her background. “I started out in fine art. I’m from NY and I was raised up going to the Met, the Guggenheim and Vanderbilt. I’m from Long Island. And then I went to school for art history and I got diverted to accounting because I needed a job. I did that for many years. I also sold art supplies in California and sold art in San Diego. All this time passed and this opportunity came up and here I am back to doing this which is what I love. I love being here.

Next to the front lobby is a large studio for an artist in residence. I look into the space and when I see the multiple looms I am sure that I know the artist and I ask if the studio belongs to Margaret Wheeler who I have had the opportunity to be acquainted with. Corrine confirms that it is indeed Margaret’s studio. Entering the studio is magical. There are at least a half dozen looms in various stages of fabric being woven. Margaret Wheeler is a master weaver and along with many other Chickasaw artists is a real Chickasaw and national treasure. 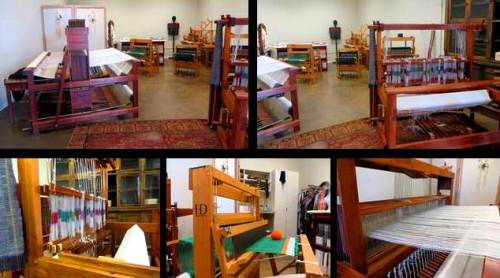 We began to work our way down the main corridor which is generous in width and one side of the corridor is set up as a gallery. We pass by a number of works by Chickasaw Artists; Margaret Wheeler masks, Tracie Davis, Mark Milligan. I know Mark from working together on the fine arts and performing arts center. I knew he was an art teacher and with the arts and humanities division but had never seen some of his work. It was a wonderful pencil sketch of still work. We passed by work of Nancy McDoniel, Dustin Mater and Brent Greenwood.

Corrine asked me if I knew Mr. Greenwood and I had to admit that I had not met him. Corrine said “people respond to his work. I like the sky. I like the colors. I like being outdoors so I like art that has an ethereal quality to it that makes you feel like there’s some space, space outside, the air. And for me that’s why I enjoy his pieces. And even the next one, that blue sky, somehow he’s captured that space.”

We continue to walk and I get introduced to Corrine’s staff as we visit the offices. A little further down is the coffee bar with a concrete counter. We come upon the art studios that can be split in half with a moveable partition and includes a smart board for instruction. Next is the ceramics studio. Corrine says “it’s the biggest draw; everyone wants to use clay.” We view the kiln room with 2 kilns. I recall the last time I used a kiln which was to heat flat sections stained glass and let them settle into a clay mold giving them a compound curve. The bent glass was for the upper half of a stained glass lamp I was working on at the time.

As we move back down the corridor we pass more studios that are for lease each equipped with a sink. I suppose that if you are an artist it doesn’t matter what you are doing, you will make a mess and will need a sink. Each pair of studios can be connected to one another with a moveable partition to create a double studio. There are 2 pairs of studios like this. It is my understanding that the spaces are very reasonable. It is easy to consider leasing one at that price just to have a place to hang out.

We step into the large gallery. I ask if the artwork is for sale. She days, very few pieces, I have 3 for sale Corrine points to a piece that is for sale. It’s a small sculpture by Mike Larson. I tell Corrine that I have had the opportunity to work with Mike Larson when we created a home for his multiple figure sculpture titled “The Arrival” which is on display in a special outdoor setting designed by FSB at the Cultural Center.

Our conversation moves to discussing his paintings of the Chickasaw elders. I tell Corrine that I have been very taken by the paintings. They are so real to life that you can feel the expressions of the elders and in a small way have a sense that you know something about them. “I agree” said Corrine. “You get a little slice of them. He captured a little slice of their life.”

Corrine asks if I have been to the outdoor space across the street with the sculptures and medallions which is an extension of the ARTesian. I reply “you mean the pocket Park?” I am corrected when I am told the proper name is the “Gateway Park “.  She hypothesizes that the little park is actually holding up the rest of the block behind it. I ask what the little building that is on the corner of the park. She says they refer to it as the Tiki Hut which is also not an official name but it is meant to provide an outdoor opportunity to promote art. Joanna Underwood is the artist of the large pot sculptures that are part of the water feature which were cast in an Austin foundry.

We walk outside and Corrine tells me of her ideas to create outdoor seating space in the promenade sidewalk that is covered by an arched arcade. We talk about the intersections having opportunities to become more pedestrian friendly with paving and textures. It is anticipated that the place will increasingly become more populated with pedestrian traffic. As we walk through the park I meet the contractor. He comments “this is my rock garden.” We ask what the official name of the park is and he replies “Gateway Pocket Park.” I comment to Corrine “there’s pocket park again.” He says “well that’s what’s on the drawings.” Corrine kids the contractor telling him “I think you did a great job. I don’t care what anybody says.” we all laugh together

The park is not technically open as there are finishing touches left. I comment on the railings which are filled between the top and bottom rail with what looks like waving grass. I tell Corrine that FSB had the same idea to make the outdoor railings a sculptural element. The Visitor Center is like a sculptural piece of art and the railings needed to follow suit. She compliments FSB’s design saying that she really likes it.

At the bottom end of the park Corrine points out the Donut Palace landmark. I tell her I am very familiar with it and that it was the first post on local Beta on the FSB Blog. We both admit that despite the visual characteristics of the shop, it does have great donuts.

I tell Corrine that the ARTesian is to be the feature of the next post on the FSB Blog. She seems a little panicked at first, but quickly follows with “I’ll need to get you one of my business cards.” We look across the street to the national park property to the south and discuss the opportunities for hiking and biking and the experience we both have had walking some of the trails.

We slowly make it back to the ARTesian and head into the retail shop part of the building. It is stocked with art supplies and makes me want to buy things like watercolor paints and brushes that I already have plenty of. Corrine says that local artists have become regulars. They come by to get supplies and get involved in the exchange of ideas. Corrine loves that part and wants it to continue to grow. She comments “because the exchange of ideas is the magic that you cannot buy. It’s what people crave; the interaction between artists.”

Corrine is a lovely lady, quite the character and was a perfect hostess. Before the morning was over she took me across the street and introduced me to the managers of the Bedre Café and the staff of the Chickasaw Visitor Center. Both visits will be featured in upcoming posts.

The ARTesian is a great addition to the Sulphur landscape and filled with artwork that is well worth the visit.