OCU Law – from the beginning

OCU’s history began in 1904 in an association with the Methodist Church which continues today. Several years later in 1919 the college decided to move from Guthrie to Oklahoma City. The new campus was built in 1922 and the institution was given a new name, Oklahoma City College. It was only 2 years later in 1924 when it was formally renamed Oklahoma City University.

The OCU School of Law formally took roots in 1907 and C.B Ames served as Dean from 1907-1910. Since that time there have been 12 deans. The current dean is Valerie Couch who prior to her installation was the U.S. Federal Magistrate for The Western District Court of Oklahoma. The immediate succession of deans prior to Ms. Couch was Lawrence Hellman, 1998-2011, Rennard Strickland, 1995-1997 and the Honorable Robert Henry, United States Court of Appeals for the Tenth Circuit who served as dean from 1991-1994 and was engaged at that time in the construction of the newest home of the School of Law at the Sarkeys Law Center. Robert Henry now serves as the university’s 17th president since 2010.

While the School of Law occupied various space on the campus in OKC, in 1956 it began conducting classes in what is the single most iconic structure on the OCU campus, The Goldstar Memorial Building. The history of the Gold Star building is somewhat shaky and mysterious. Construction broke ground in 1949 but was halted in 1950 when funds ran out. Construction resumed in 1951 when additional funds were secured and the building was completed in 1953; well at least the first 3 floors.

The 4th through the 13th floors remain unfinished today although the majority of the upper floors are located in the small footprint of the square tower. The 4th floor was slated to be a chapel while the floors in the tower were supposedly destined for faculty offices. 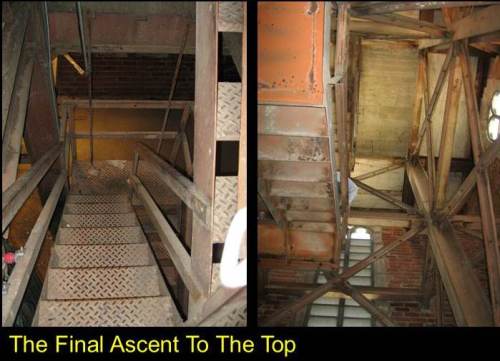 Views from the tower and if you are brave enough from the balustraded narrow outdoor landing at the top of the tower are fantastic. The panorama of the city is outstanding. The climb to the top is not for the faint hearted but I have made it twice to date. FSB has performed a number of studies of the Goldstar Building including upgrading its tired mechanical and electrical systems but most recently we studied the feasibility of finishing out the tower floors. There are several challenges including accessibility and life safety issues.

The Goldstar Building stands 286 feet tall to the top of the 200 pound gold star that sits atop the tower which can be seen some 10 miles away. Carved into the limestone lintel arch over the main east entry are the words “School of Religion.” It was built to honor Methodists who died in WWII and was intended to house the United Methodists religion department. But mysteriously it never served that role. Administrators are unable to explain the disparity.

It was later in 2002 under the leadership of Dean Larry Hellman that the OCU School of Law was feeling growing pains and decided it was time to conduct a master plan for the future of the OCU School of Law. The law library was constrained by the small footprint of the Goldstar Building and the inefficiency of being spread over 4 levels of the building. The growing academic program of the school was pressing the limits of the classroom and special programs space in the Sarkeys Law Center.

This is when FSB first became involved and began its longtime relationship with the Oklahoma City University School of Law.

One response to “OCU Law – from the beginning”