Growing Pains and a Distant Relationship

Under the tenure of Dean Lawrence Hellman, the Oklahoma City School of Law was beginning to feel the effects of growth within constraints. Life was good when the School of Law was all under one roof in 1979. But when it outgrew the space in the Goldstar building, the law school expanded into a new facility, the Sarkeys Law Center. The new classrooms, administrative space and moot and trial courtrooms were fresh, new and ready for the new classes of students that could no longer fit in the space left behind in Goldstar.

With an infusion of dollars at the same timeframe, the Goldstar was renovated to allow the library and faculty offices to grow in size and number. The law school was ready to move into the future and things were great until some years later in 2002 when the need for more space showed up again on the doorstep. This time it was the library that was in need of space that was appropriate to the current notion of how libraries would not only house books and reference materials but how they would accommodate and house students and faculty in a growing interactive environment.

Although the Goldstar building had dutifully served the law school for some 20 years, the long and narrow building footprint plus the library being spread over four levels vertically would not allow it to become the library of the future. There was another issue that was beginning to wear on the academic challenge of teaching law and that was the distant relationship of the Goldstar building and the Sarkeys Law Center. The two buildings were not adjacent to each other but rather separated by a band of student housing. The continual outdoor trek between the two parts of the law school made administrators, faculty and students long for the time where they could once again be under one roof.

In 2002 FSB was selected to develop a Master Plan for the School of Law that would define long and medium term goals and objectives along with concepts that would map the future growth of the law school both physically and functionally. This was paired with an analysis of the existing facilities. An updated definition of space needs was developed which indicated that the projected needs of the law school would require a facility with approximately 123,000 square feet. The combined Goldstar and Sarkeys buildings only totaled 104,923 square feet.

Short and long-term goals focused on improved courtrooms, library and classrooms and additional faculty and administrative offices along with improving existing building envelopes and engineering systems. The long-term goal statements included a new building for library and court functions and the reorganizing of all School of Law functions into a Law Quad environment. Four preliminary options were studied at that time.

The pros and cons of each Option were evaluated.

Option 3 came the closest to setting a new direction for the redevelopment of the OCU School of Law and it evolved into a Law Quad concept for the SW area of the OCU campus. 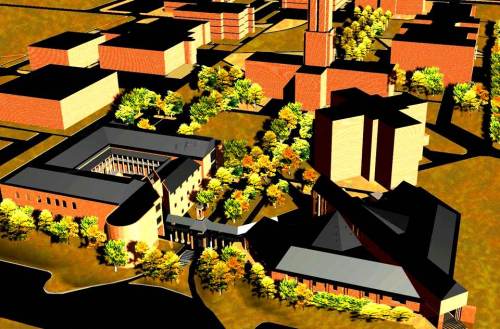 But this saga is far from over…