One of the feared and dreaded infiltration movements in architecture is the movement of moisture into a building. Keeping water out of buildings is a constant vigil within the industry. We’ll take a look at how stopping this movement below the surface, underground, has been addressed. A fair amount of the underground waterproofing has been installed at the Visitor Center at this point; particularly on the north side of the project where the building is tucked into the sloping site.

No one wants to hear the words “roof leak, window leak, wall leak or any other kind of leak” that shows up as stained ceilings, stained walls, wet carpet or worse. However, one of our more noted colleagues, Frank Lloyd Wright once said, “if the roof doesn’t leak, the architect hasn’t been creative enough.” Frank is certainly known for his creative architecture, but may also have a share of famous buildings that have experienced water infiltration.

Aevar Hardarson, an architect and research fellow at the Norwegian University of Science and Technology, took a shot at providing insights to this problem area in a doctorial study that focuses on the design and production process within a backdrop of social-anthropological thought models to provide an interpretation of the phrase “all good architecture leaks.” The thesis seeks to determine if the statement is witticism or wisdom and is an entertaining read. For me, the reality of it all is that there are way too many nooks and crannies on buildings where moisture can find its way in and consequently the vigilance falls to an entire cast of characters whose roles include good design, good products, good installation and good maintenance. That would pretty much include all the players in the Visitor Center project.

FSB has chosen a granular bentonite product for the waterproofing of below grade walls, footings, etc. Most high-grade natural sodium bentonite is produced from the western United States in an area between the Black Hills of South Dakota and the Bighorn Basin of Wyoming. The details of the quality levels, product selections and installation are outlined in the FSB Specification Section 071700 Bentonite Waterproofing. The product comes in the form of a sheet good that is placed against the exterior surface of the below grade structure.

In the construction photos at the beginning of the post, the bentonite system is seen applied to the footings prior to them being backfilled with soil.

The subsurface waterproofing system specified is designed to hold moisture back at the exterior surface of the below grade structure and not allow migration to the interior of the building. The system also directs any water to the perimeter drainage which in turn carries it away from the building. This is consistent with the recommendation of the geotechnical report which states “it is imperative to design a system that allows the water to be removed from behind the wall which will reduce the potential for the build-up of hydrostatic forces behind the wall. The system needs to allow water to flow into draining system (i.e. perimeter drainage).” While the geotechnical report is directly concerned with eliminating hydrostatic pressure against the basement walls from a structural standpoint the same hydrostatic pressure can force moisture through hairline cracks to the building interior spaces resulting in water infiltration.

The specification provides a system description that states “Provide bentonite waterproofing and prefabricated drainage composite system to prevent the passage of liquid water and install without defects, damage or failure.” FSB has added a rigid insulation board sandwiched between the waterproofing layer against the concrete wall and the vertical drainage mat. The following architectural and structural details show how the waterproofing system is to be installed. 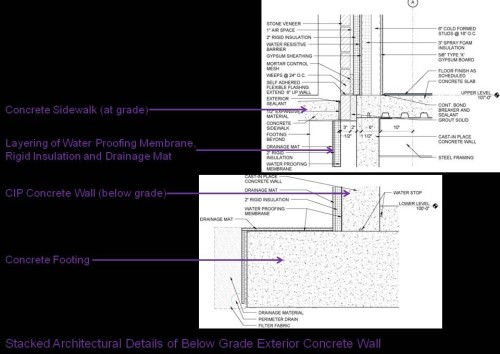 The site photos below show how the waterproofing system is being installed in the field. “Pookie” is a technical field term for trowel grade bentonite. The material for this part of the waterproofing system is called out in paragraph 2.2 C. 1. of the specification and the manner in which it is installed is called out in paragraph 3.4 B. of the specification, 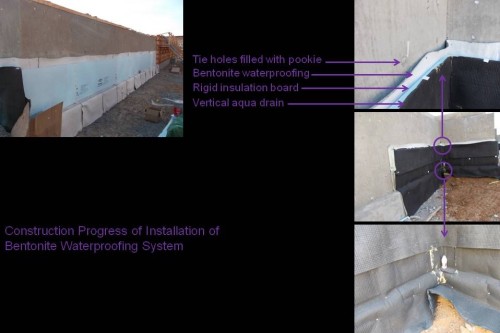 The following photos show the wall being initially backfilled with a layer of crushed rock that allows water gathered at the wall by the drainage mat to migrate to the perimeter French drainage system which was moved to the base of the earth embankment.

The following photos show the continued backfilling of the wall with select earth fill.

Diligence in quality design, selection of products that have a proven track record and care in the proper installation of the system will ensure keeping out the underground movement of water infiltration at the Visitor Center project.

Well, it’s time for a celebration.

This marks the first anniversary of the FSB Blog that launched one year ago in January of 2012. By all standards we have beaten the track record of the majority of blog launches that have not sustained this timeframe and many others that have not been able to maintain an unbroken string of a new post every week. 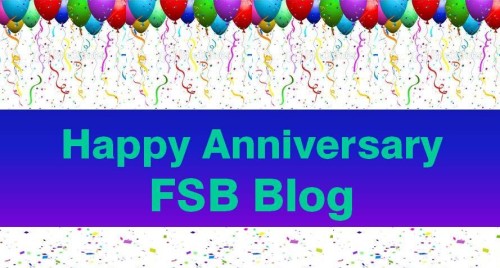 One response to “Infiltration – an underground movement”